I really wasn't planning to be an Angel Tree warrior this year - I had so much fun "bumping" other kids up last year, and gave away some of the money that was meant to be for my child (although she still got to her $1000), that I planned to just spread all my money around this year. 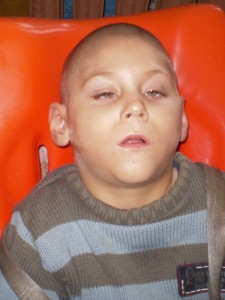 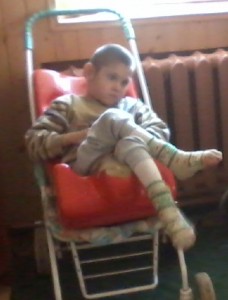 But then, on the last night with just hours to go until the Angel Tree started, there were still a couple of kids who needed warriors, so I signed up for Francis.

Poor Francis - the picture they have of him on the Angel tree is pretty bad - the full body picture of him is better, but they want a close-up of the child's face for the ornaments.  It's not obvious from the photo, but he has just turned 8.

I'm going to paste in an excerpt from Laura Jeremy's blog - she adopted a little boy (now called Seth) from the same institution where Francis still is, and met Francis while she was there:

Meet another one of Seth's friends

See this little boy sitting next to Seth?  The little boy in the orange chair? 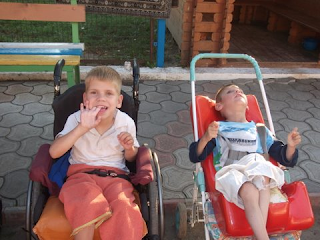 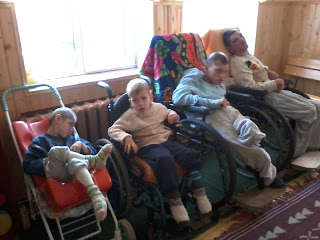 We have a chance to help him.  His name on Reeces Rainbow is "Francis".  Francis likely lived the first 6 years of his life at the baby house with Seth and Cohen (Josiah).  He was transferred at least a year before Seth was.  Francis is living at the institution where Seth was.  At the institution, they were in the same room and usually sat side by side.  Francis is a little boy who desperately needs a family.  He, like Seth, has cerebral palsy.  He gets food and he's clean, but he gets no mental stimulation, no therapy, no stretching, no schooling.  He sits in his orange chair day after day after day.  I can't imagine the despair and loneliness that must cause.  I can't imagine waking up every morning, knowing that all I'm going to do is sit in an orange chair until bedtime.  Francis is very sweet, but very delayed and very locked inside himself.  He has the most amazing blue eyes and of all the boys who worried me while I was there, he was the one who worried me the most.  Francis has significant needs.  And he needs a family to step forward to help him.

We have a chance to help change Francis' life. Francis has been nominated to be on the Angel Tree this year. 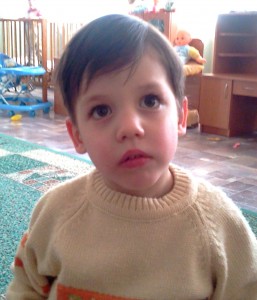 Kurt is a handsome young man with brown hair and giant brown eyes.  He has very mild CP.  He is able to walk on his own and is a delightful boy.

This is one of the kids whose profiles bother me the most - kids that in the US would have surgery shortly after birth, and then go on to live totally normal lives.  But in his country, he can't have that surgery - either because there is no money to pay for it, or because they have no doctors with the necessary skills.  I don't know which is the issues in Owens'  case,  but he needs surgery soon to prevent permanent damage.  Even more than many of the other kids on Reece's' Rainbow, he really needs a family that can get him the appropriate medical care. 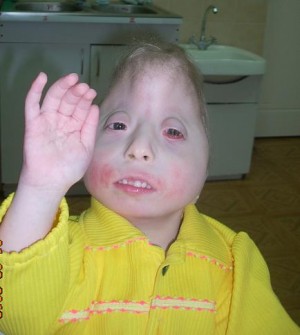 Boy, Born December 2007
This darling little boy is waiting for his forever family, and we believe his condition to be one called Saethre-Chotzen Syndrome.

Also known as Acrocephalosyndyldactyly Type Chotzen or Saethre-Chotzen Syndrome. Chotzen Syndrome is a dominant genetic condition. They have a tower-shaped skull (acrocephaly), fused fingers and/or toes (syndactyly), asymmetric face, widely spaced eyes, droopy eyelid (ptosis), strabismus (crossed or “wall-eyes”), beak-like nose, small upper jaw, and jutting out lower jaw (prognathism).   Some plates in their skull close early.   This is called craniosynostosis.   Often people with Chotzen Syndrome are mildly hard of hearing. Sometimes they’re unusually short.   Occasionally the closing of the plates in their skull can compress their brain and slow their development.   Sometimes boys with Chotzen Syndrome have undescended testicles.

Teamwork Tuesday - The other Angelina

Ooops!  We were meant to be posting about Angelina "3g".  So, here is another little girl by the same name, also in need of a family.

This beautiful muffin, look how she has grown!   She does have a heart condition  and will need to seek a cardiologist and surgery once home.    She needs a family ASAP!
Additional photos available!  SINGLE MOMS and larger families welcome!
$4790.50 is available towards the cost of my adoption!
Posted by Sigrunc at 7/31/2012 06:43:00 AM No comments: 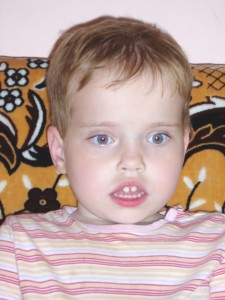 Heather has been waiting for a family for such a long time - as little as she is, this girl is already eleven!  (She's been listed on Reece's Rainbow for over a year, which is why it says she is ten in her write-up). I know her family must be out there somewhere! 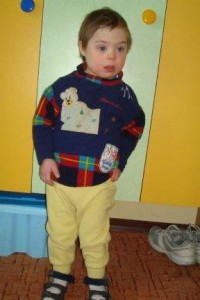 This tiny girl is ten years old!  So petite!

Heather doesn’t have any other health complications listed at all.

Another sweet munchkin that does not have a donate button yet - that means that Reece's rainbow has not yet received enough information about himto start a grant for him.. However, the information can be obtained by the agency if an interested family asks.

2gwwe-15H
Boy was born in December 2008
Diagnosis: Down syndrome
Look how handsome R.J. is!   Already 3 and facing transfer this year

Be A Christmas Warrior!